Former Foster Youth and CYC All-Star Aida Chavez Finds 'If You Believe in Yourself, Anything Is Possible'

“I aged out of foster care with no place to go,” says Aida Chavez. “Nevertheless, I knew I wanted to succeed.”

And succeed she has. With a BASW and MSW, both earned through the Title IV-E Stipend Program at Fresno State University, Aida currently is a social worker in the Resource Family Support Placement Unit of the Fresno County Department of Social Services (DSS). She assists in locating Resource Family Homes on behalf of minors needing placement and in providing supports and resources to county homes, besides delivering Spanish-language Resource Family Approval orientation.

A DSS veteran, Aida has worked there since 2002. In fact, the entry-level job she held as a former foster youth mentor when she was 19 piqued her interest in social work.

“My assigned social worker believed in me and encouraged me to work with transition age youth,” she says. At the time, her job responsibilities included supporting the local California Youth Connection (CYC) chapter and promoting youth participation within the Independent Living Program (ILP). “Being a former foster youth mentor allowed me to gain knowledge of how diverse the field of social work is,” she says.

“It was not until this point that I saw a great need to become a social worker,” says Aida. “I realized that I was able to relate to current and former foster youth, as we had common experiences such as being separated from biological family and multiple placement changes.” Looking toward her future, she says, “I wanted to advocate for child welfare and policy change so that others didn’t have to experience similar obstacles that I had to overcome.

For Aida, CYC was a catalyst for which she is profoundly grateful. “Being a member of CYC is what motivated me to follow my dream,” she says. “I learned personal and professional skills among CYC members, supporters, and staff. I had the opportunity to network with many leaders locally, statewide, and nationwide. I am honored and proud that I was a CYC member and supporter for 11 years. I thank CYC for all the experiences that I gained. Within CYC I found the importance for current and former foster youth to have a voice in child welfare policy.”

For her 10 years of hard work and dedication to the organization and its members, Aida received CYC’s statewide All-Star Award. Additionally, the Fresno County Board of Supervisors presented her with a resolution recognizing her CYC achievements. “I am very thankful and honored for receiving this recognition as it was rewarding work,” says Aida.

EDUCATION: KEY TO HER SUCCESS

“Growing up, I was told that education was the key to succeed, and I believed it,” says Aida. So determined was she to pursue that education that “I signed up to CSU Fresno, and despite of not meeting the four-year criteria, I was accepted,” she says proudly.

While working on her BASW, Aida recalls, “The support that I received from the Title IV-E program was beyond just being a student. I was treated like family. The staff were very supportive as they were always willing to listen. The support and training that they provided me as an undergraduate encouraged me to continue with my master’s in social work.”

After earning her BASW, Aida continued to work for DSS in a variety of positions—from Emergency Response and Swing Shift to Legal Guardianship, Team Decision Making and Planned Permanent Living Arrangement (PPLA)—all of which she enjoyed.

“I definitely found it rewarding making a difference when I worked in the ILP and PPLA Units, as I was able to work with teenagers and young adults in the Extended Foster Care Program (AB12),” says Aida. “I found that I was able to relate to this population and provide them with the support that they needed in order to be successful with their identified life goals. I also enjoyed my two years of internship in the Volunteer Family Maintenance and Resource Family Support Placement units.”

While still employed, Aida was inspired to continue her education. “My strong passion of working with children and families encouraged me to pursue my post-secondary education. I found that it was important to continue my education as it would open a range of additional leadership opportunities.” She also sought the MSW because “I wanted to be a role model for my daughter and for those that are faced with difficult life challenges.”

WORKING AND GOING BACK TO SCHOOL

The Fresno State Title-IV E team were supportive of her as she pursued her BASW, Aida says, so she knew she would be able to count on them as an MSW student. But going to graduate school presented challenges, she found. “Working full time, going to school part time, and being a single parent was not easy.” Still, she says, “I had the support from my employer, as I had to flex my work schedule in order to attend classes, seminars, and conferences. I also had the privilege to complete a paid internship within child welfare services."

She notes, “The MSW program required time management, organization, and self-care skills in order to be successful. Building on my support system was extremely important, as I had limited immediate family support. My 12-year-old daughter Briana was also a motivation for me as she witnessed me study long hours.

“With the MSW [which she earned this past spring], I find that many doors of opportunities will open for me as I continue to make a difference in the lives of others,” says Aida. “It assisted me to grow professionally and personally in order to best serve the children and families that I will continue to work with. I am proud to say that I am now a social work practitioner in the Resource Family Support Placement Unit. I now want to give back and empower others as once others did for me.” In the near future, she says, “I look forward to becoming a field instructor and part of management.”

Reflecting on her accomplishments so far, Aida says, “Now that I have received my MSW, I like to say that if you believe in yourself anything is possible. At this time in my life, I feel that I have accomplished something I never pictured myself doing. My career journey has shaped the way that I reflect on life and in helping others. I encourage everyone who wants to become a social worker to pursue this rewarding career.” 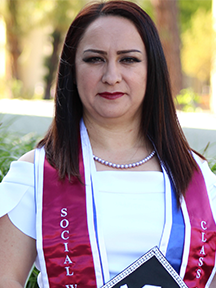