It was while she was working in a group home for at-risk teens and completing a graduate program in school counseling that Latishia S. Irving made the decision that would begin her career trajectory to where she is today—Social Worker Supervisor II with the Monterey County Department of Social Services/Family and Children’s Services.

While working at the group home, says Latishia, “I started to work directly with public child welfare staff, as they would come and visit the youth at the group home. I started to ask them questions. I admired the advocacy they provided to the youth and their ability to be agents of change for youth in crisis. I decided I wanted to do the same thing; I decided I wanted to be a social worker.”

With her M.S. from the University of LaVerne, Latishia began working as a social worker for the private non-profit Families United, Inc.–Foster Family Agency in 2002 and remained in the not-for-profit world for four years. As social worker supervisor there, she provided leadership, direction, and guidance for social work staff. Her other responsibilities included assessing and meeting the foster care placement needs of public child welfare agencies throughout California and agency-wide intake and recruitment, as well as foster home certification.

In 2006, Latishia began her career in public child welfare as Social Worker III with San Joaquin County Human Services Agency. Among her responsibilities, she designed, developed, and implemented long- and short-term treatment plans for a caseload of 30 to 35 children and families, as well as provided adoption services and investigation of physical and emotional abuse/neglect.

MSW in Her Sights

Even with her heavy workload, Latishia was already looking to the future. She decided to return to school to get an MSW “in order to become a supervisor and have the ability to promote if the opportunity came my way.”

She enrolled in the Title IV-E MSW Stipend Program at California State University, Monterey Bay while continuing to work full time. “I had my mind made up that I was going to be successful, and I did everything in my power to do so,” says Latishia. “I completed work assignments before they were due in order to stay ahead of my work. I gave up my weekends for homework and studying, and I sacrificed everything until I completed my goal.”

Says Latishia, “I worked full time, and Title IV-E paid for my entire program. I could not have completed my MSW without having the Title IV-E program financing my education.” The program paid for tuition, books, parking, and gas.

Latishia graduated in 2016. “I earned my MSW and walked away owing nothing but two years of service at an agency that supported me for three years while I earned my MSW degree,” she says.

Having the graduate degree has been valuable to Latishia. “The Title IVE program enhanced my career and allowed it to flourish,” she says. “I did not become a supervisor for the public child welfare sector until after I completed my MSW at CSUMB,” she says, noting, “An MSW degree has allowed me to promote as a social worker and to promote into management.”

In addition, she observes, “The ability to earn my MSW while working in child welfare helped to broaden my understanding of social work, cultural humility, and making choices that also are in alignment with the social work Code of Ethics.”

In 2007, Latishia joined the Monterey County Department of Social and Employment Services in Salinas. There she navigated children and families through the Juvenile Superior Court Child Welfare System in order to achieve effective family reunification. Additionally, she supervised a challenging caseload of 10 to 15 children/young adults and worked extensively with mental health professionals to secure and preserve family reunification.

Later that year, she promoted to her current position as Social Worker Supervisor II, still in Salinas. She performs advanced social work activities for the Family and Children’s Permanency Planning Unit while also directing and supervising a more challenging caseload of 20 to 25 children/young adults. Besides this, she provides case management services and coordinates activities with law enforcement, legal authorities, and the court systems.

Meeting, Enjoying the Challenges of Supervising

Throughout her career, Latishia has encountered some heavy caseloads and challenging clients, which she has relished. “I have enjoyed working with families from diverse populations, and I have learned a great deal about other cultures,” she says. “I have experienced families coming back together after abuse, neglect, and tragedy. I have witnessed the power of change in families, parents, and children with the right resources in given.”

Being a supervisor suits Latishia. “I like the coaching and training aspect of being a supervisor. I appreciate having the opportunity to give back what I was given as a worker,” she says. “I am now supervising an MSW student; I am able to give advice and information to my employee that helped me so, in turn, she will be successful and supported. Giving back is my biggest reward as a supervisor.”

Among the position’s challenges, Latishia lists “addressing clients who are angry and displeased with their service or inability to be served and have their needs met” and “addressing disciplinary issues with workers and redirecting challenging behavior.” However, she observes, “These challenges are also helpful and occur to make supervisors better. The ability to face challenges appropriately with the end result being growth and support of the person allows for professional development as a supervisor.”

As she reflects on her career so far, Latishia says, “No matter what capacity I serve in as a social worker or supervisor, I enjoy being an agent of change and showing clients there is another way. I enjoy helping people become empowered by resources, services, and support. I enjoy serving my community and appreciate the opportunity to be an agent of change.” 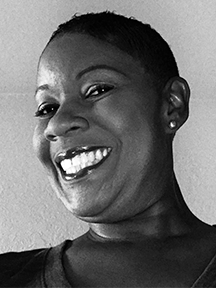